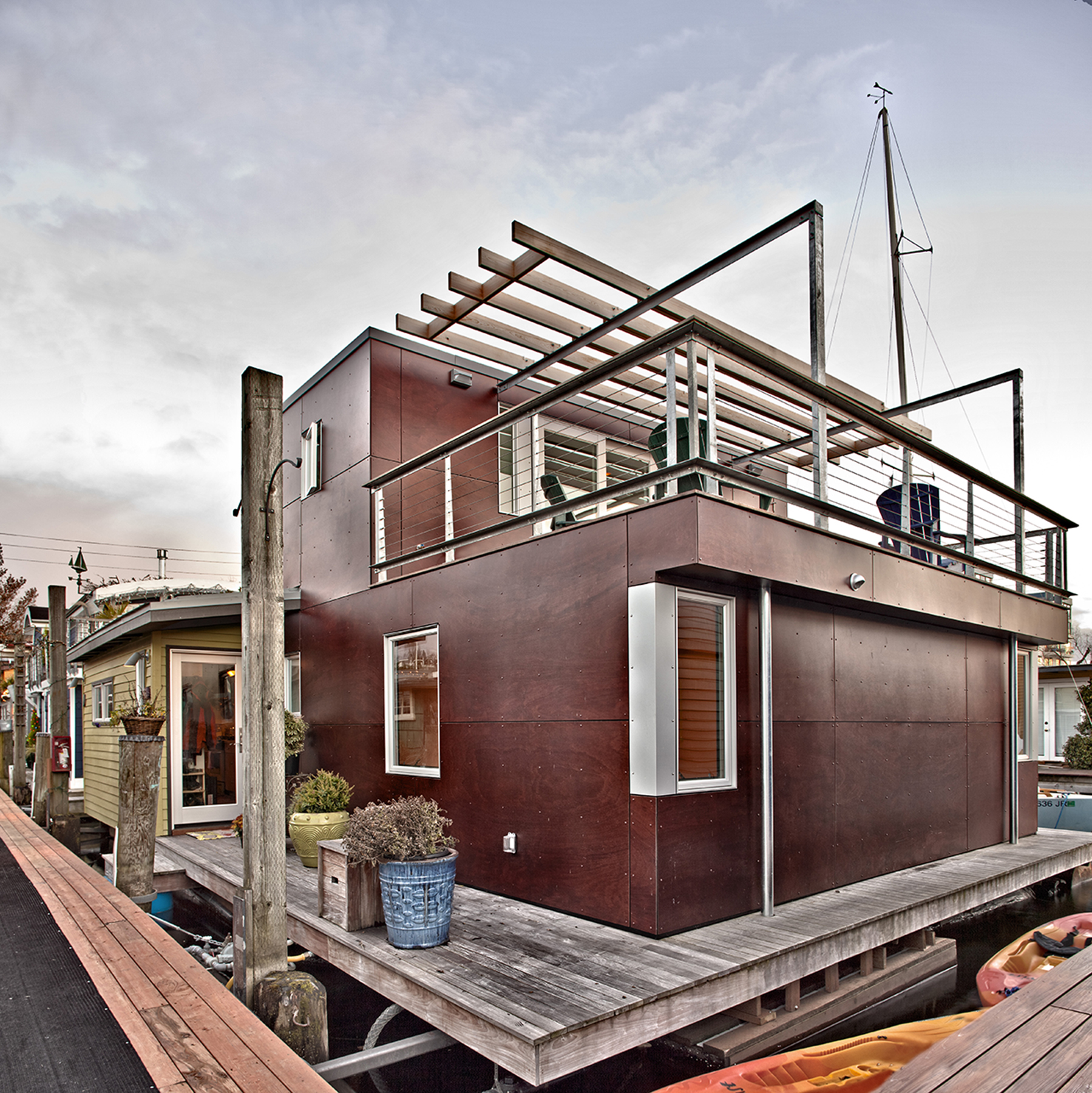 Built as humble shacks on bundled rafts of old growth logs, the floating homes on Lake Union have come a long way from their seedy Prohibition era origins on the fringe of Seattle society. They are now among the most sought after properties in the city, offering a unique lifestyle choice for those who readily trade limited storage and a little privacy for self expressive freedom and a tight knit community. In 2004 a former client inherited this house from his parents and asked me to do some interior remodeling on it, which included moving walls and creating a brand new kitchen. Five years later, after possession had passed on through the family, I was called back again to give the house a completely new feeling and character. This was accomplished through an extensive remodel of the entire interior, the addition of a second level and roof deck, new exterior cladding, windows & doors; full insulation, and trellises.

Building on a floating deck is a unique construction challenge, since a level or plumb bob are useless on a platform rocking in the water. Instead, the contractor used a huge metal triangle to make the walls perpendicular to the floor and cross measured every diagonal to get elements as square as possible. Since the house is near the end of a 250’ long dock, everything- tools, products, and building materials- had to be carried down by hand.

Creating a sense of openness and ceiling height is a common challenge in these houses, especially since the zoning code limits their overall height to 18’ above the water. With the floor platform set at 2’, that left only 16’ for two stories including the structural thickness of roof and floor. Rather than build out an entire second floor addition, which would have doubled the living area but pancaked the rooms, we chose instead to create a modest master suite with a generous rooftop deck, leaving plenty of visual breathing room and view corridors for neighboring homes. This gesture was warmly appreciated by the homeowners’ association, who ushered the project through their review with enthusiastic support. It also allowed us to retain most of the shed roof volume over the living room and kitchen, and keep the Douglas fir ceiling that reached 11’ height above the floor.

The client and her husband are accomplished mandolin players, and the referenced imagery of strings, frets, and polished wood appear in various elements through the house, from the wood trellis beams to the warm red-brown Parklex wood panels on the exterior. The design of the custom steel spiral stair is perhaps the most conscious reference, in which each tread arm
includes a trio of bent rods that recall tuning keys as they support the step below.

The completed design interlocks old and new elements to reflect the quirky, ad hoc quality of the moorage community, while nonetheless taking care to ensure the composition is visually balanced and well proportioned. The result is a cozy, light-filled home that is equally suited for winter dinners with friends, summer dips in the lake, and holiday parties beneath the fireworks.