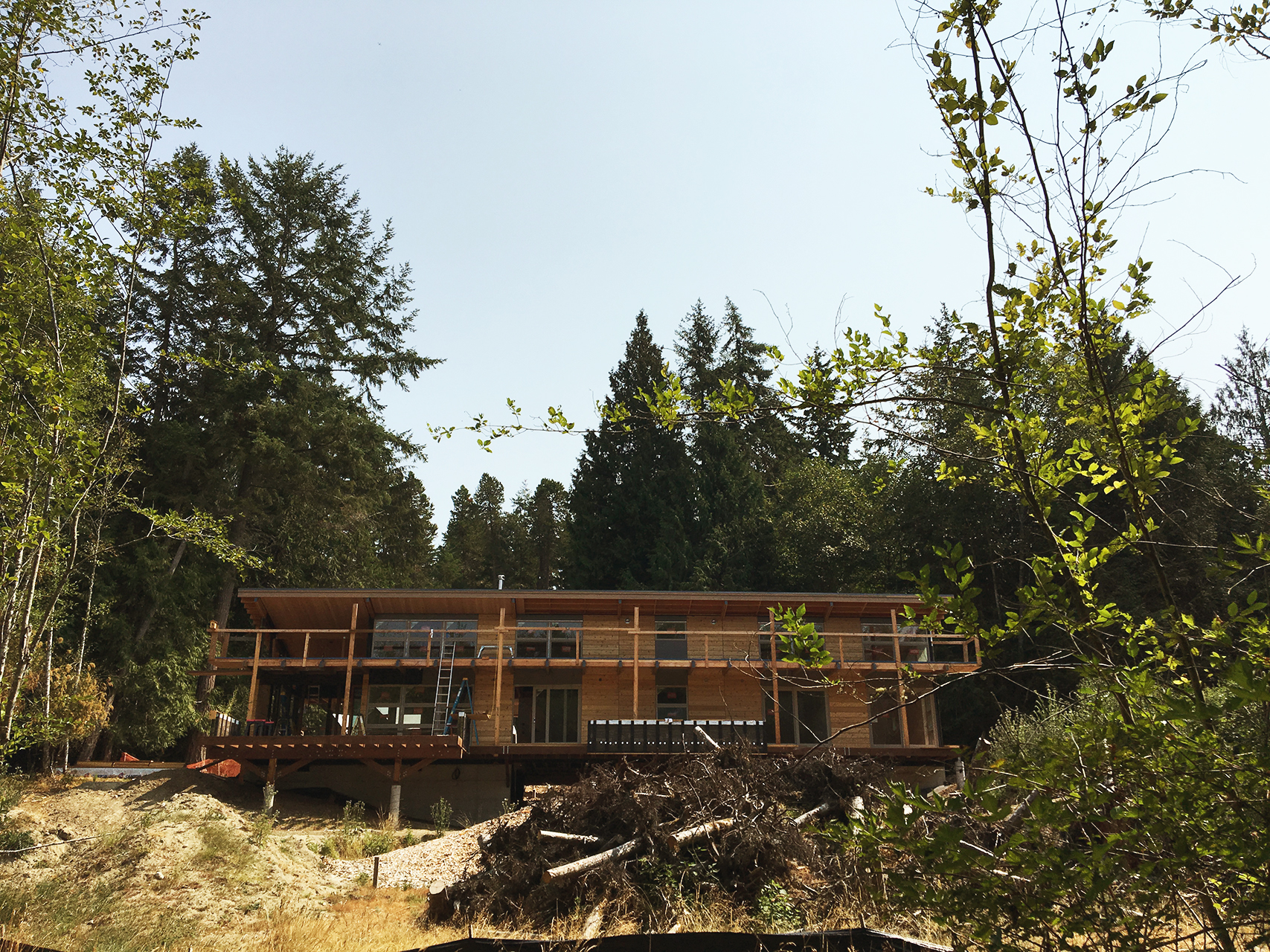 Two and a half years ago, on a rainy weekend in March, Bruce set off for an island camping trip. This rather impromptu and wet excursion had been inspired by a call from a client some months earlier. They had phoned in with the desire to build a cabin on one of two properties available to them on the San Juan Islands. Thus both he and the clients had gone to get know the lay of land and decide where and how to best accommodate the future cabin.

After those initial days of stomping around the site, began what Le Corbusier affectionately called the “patient search” – i.e. the design. It is always difficult to describe the design process, but one the aspect that seems consistent, regardless of the project, is that the initial steps can quite frequently be the hardest. An undeveloped site, as what was presented on the island, could be likened to an empty canvas, such that when anything is possible it is difficult to decide which stroke to make first. Frequently, we search for precedent building types or site constraints to give direction to a project in those early stages of design. In the case of this island home Bruce and the clients found that spark of inspiration in the mid-century beach homes of Cape Cod, Massachusetts. One house in particular, designed by architect Marcel Breuer, served as the launching point for this design exploration.

While the initial inspiration came from the 1960’s home, the final design does not, at least at the surface level, bare much resemblance to the modernist building. The clearest similarities that remain between the two can be found in their respective plan diagrams. Both houses have long, rectilinear plans with unambiguous programmatic separation between living and sleeping spaces. Likewise, in both cases, the entry leads into an open living/kitchen area with a single hallway to access the more private areas.

While the Breuer house diagram gave the design traction in the beginning, the project, as would be expected, began to take it own shape. Additional program requirements such as: expanded storage along the hallway and in the bedrooms, a more expansive and accessible deck, a larger, guest-friendly bathroom layout, a screened-in porch adjacent to the living room, and an entry vestibule are a sampling of the major changes in the overall plan.

The two are further and most notably distinguished in section. Breuer house has a tight-eaved, low slope profile, where as the Lopez design has generous eaves and dramatic sloped shed roof. The sectional quality of the Lopez house design is both responsive to the climate of our region while creating an interesting dynamic between the house’s two long edges. Such that the entry façade is modest and private, while the opposite completely opens up to the forest views and soft northern light.

There are hints throughout the design that give credence the Breuer house’s influence, but they are, in the end, subtle and nearly unrecognizable. Such though is the nature of a design inspiration. Whether the origin be the plan of a house, a natural reference, or a series of abstract shapes, the inspiration’s influence serves simply as a launching point into a unique design exploration that may only conceptually resemble where it began.

With the design now finished the trips out to Lopez Island are no longer planning exercises, but rather opportunities to check-in on its progress. In fact, the visit I was able to make this past August marked one year since beginning construction. At this point in its development we try to make these trips semi-regularly to ensure the status and process during construction.

The site visits allow us to work though aspects of the design that are best handled in the field. For example, on this past trip, Bruce discussed flooring thickness with the contractor. With the subfloor now installed, the debate was centered on how deep hardwood finish layer needed to be. They came to a decision by laying the different options at several edge conditions around the room. This process allowed them to make a choice that was cost saving in man-hours and materiality while also providing a smoother transition to the area of floor to be finished with tile.

Similarly, as with any site visit, we also went to check-in on the completed construction of specific line items. For instance, just one-week prior, the drywall subcontractor had finished their installation and we wanted to assure its quality before it became cost prohibitive to make alterations. When inspecting drywall, we look for the imperfections that signal a rushed, ungraceful process. These indications are most commonly found in the form of blemishes or bumps on the wall surface and wavering, out-of-plumb corner beads. In this case, the drywall had been completed to near perfection; even our somewhat tricky door-frame detail had been executed with skill and patience.

The expertise and dedication to quality shown in a drywall installation is indicative of how the entire construction has preceded thus far. The contractor, Thomas-Fragnoli, has done an incredible job and the quality of this home demonstrates the power that an alignment of goals between contractor and architect can yield in a project. If all things proceed as planned, not many more visits will be needed on our part. Construction is set to be finished in a couple months and with its completion that idea, sparked in couple of soggy tents and inspired by the clean lines of the modernist beach homes, will finally become a reality. 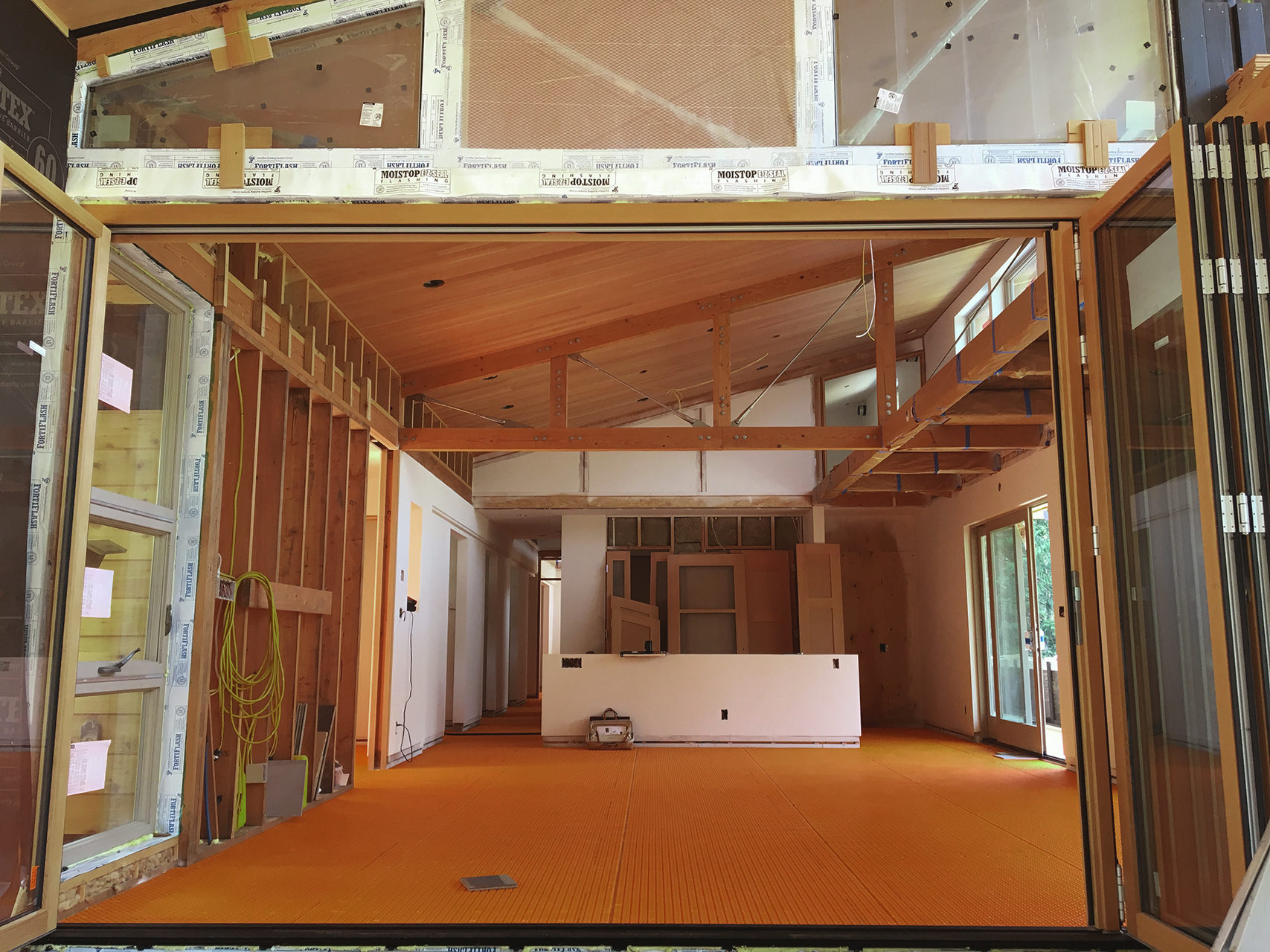